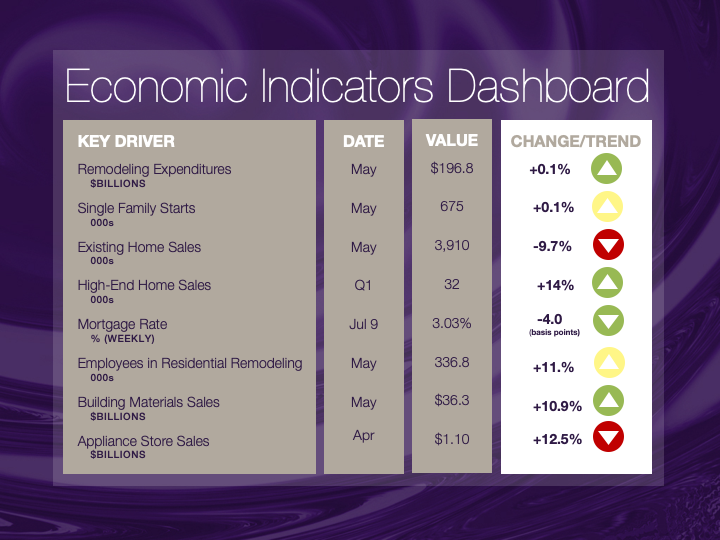 Women Workers and the Pandemic

How has the COVID-19 pandemic and subsequent shutdown of the economy affected women in the workforce, and how does it compare to their male counterparts? To answer these questions, a little pre-pandemic historical data on female employment is in order.

For the past six decades, women have joined the labor force in increasingly greater numbers. The female labor participation rate, that is the percentage of women of working age who are either working or looking actively for a job, rose from 37% in 1960 to 60% at the turn of the 21st century. It fell slightly, by 2 to 3 percentage points, after the 2007-2009 recession. 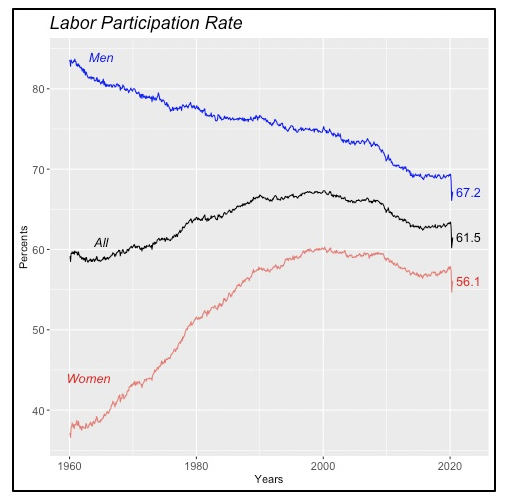 The greater female participation rate, combined with that of males declining, resulted in women accounting today for half of all U.S. workers. In 1964, the earliest date for which data on female workers is available, they represented just 32% of the American workforce.

However, as one would suspect, there are large differences in the presence of women workers among the various industries or sectors of the economy. It is well known that they dominate in several industries, including Health Services, where women hold eight of ten jobs; Interior Design, where more than two-thirds of the workers are women, and Education, with a workforce made up of 63% of women.

The chart below displays the share of women workers in major industries or economic sectors. The red bars highlight three areas close to the business of NKBA members. The Manufacturing sector is not highlighted, even though many of our members participate either directly or indirectly in it, because a large portion of manufacturing is not related to K&B industries (e.g. aircraft or auto manufacturing.)

Within the K&B-related fields, other than Interior Design, women represent just under half of the workers (48%) in Real Estate businesses. But they are only one of eight workers (13%) in Construction businesses. 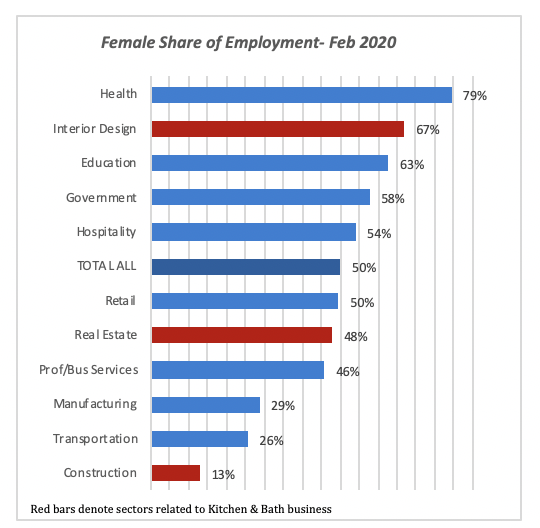 Women have been doing better than men, with a slightly lower unemployment rate. On average, the unemployment rate for females has been roughly half a percentage point lower than that of males over the last decade, since the end of the 2007-2009 economic recession.

Impact of the Pandemic Shutdown

Overall, women have been affected more than men over the last four months of economic shutdown. Between February and June, employment among males has contracted by 8.7%, almost two percentage points better than females, whose employment fell 10.5% during the same period. (Note that in the chart below, figures are rounded to show no decimals, for easier reading.)

At the top of the list is Hospitality businesses, where women’s employment has fallen 40% — almost four times more than the decline for men, which was 12%. 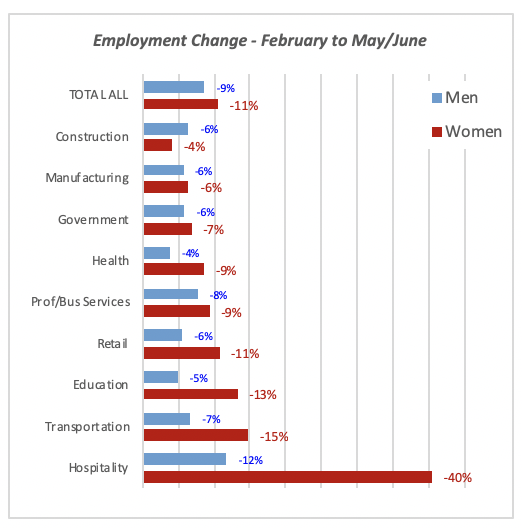 One reason for the stronger performance in construction is that the vast majority of firms are small; 83% of the construction firms employ fewer than 10 people. Although there’s no specific data on the proportion of males and females by business size, anecdotally, many of these small businesses are bound to have an office manager who is likely a woman. If any of those businesses has to lay off an employee, it will not be the office manager, since that role is  essential for running the business.

Within Specialty Trades, however, women have fared better. In February, females were 11.7% of total trades employment, only to rise by 0.4 of a point to 12.1% by May (the latest monthly data available). The table below displays women’s share among employees in several Construction Trade Specialties, and the change in their share caused by the economic shutdown. 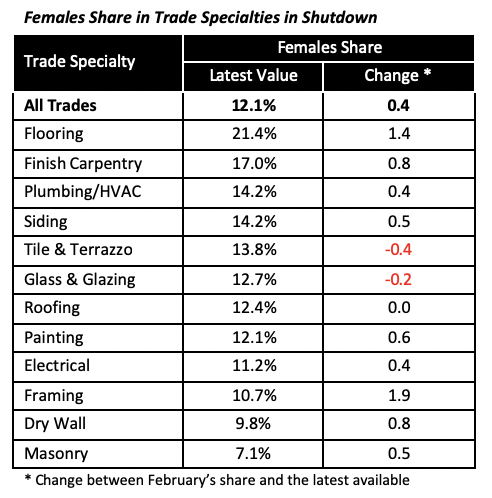 As seen in the table above, women have gained share in virtually all trades except “Tile & Terrazzo” and “Glass & Glazing” contractor businesses, where the share of females has fallen minimally.

Along with the higher drop in employment among females as a result of the shutdown, their unemployment rate has worsened relative to males.

While male unemployment rate has increased by 7.2 percentage points since February, to 10.6% as shown in the chart below, the female rate is now over one percentage point higher than that of males, at 11.7%. The chart also dramatically illustrates the sharper initial rise in the female unemployment rate, which jumped to 16.2% in April, almost three points higher than the 13.5% rate for males. 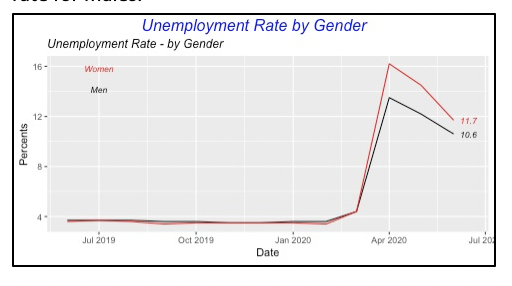 Last week brought further news that fewer people are being laid off each week, with 1.3 million persons filing for unemployment benefits. This is nearly 100,000 fewer than the week before, when 1.41 million had filed for benefits.

The number who are receiving benefits also dropped for the week, to 18.1 million people —750,000 fewer than the previous week. 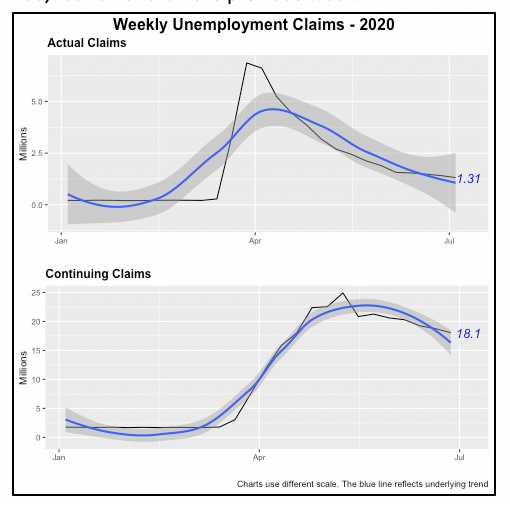 Nonetheless, these numbers still highlight the dire situation in which the economic shutdown has placed millions of American workers, with no relief in sight.

At the same time, the Mortgage Bankers Association reported a modest increase in the volume of mortgage applications during the week ended July 3, a week earlier than the latest mortgage rate data. This could suggest another increase in mortgage applications will happen this week. But this is not to imply that there will be a sharp rebound in housing construction or remodeling, since untold millions of homeowners might be currently under severe economic stress. 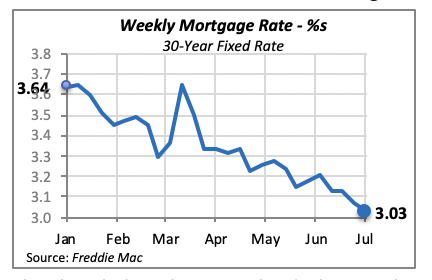 The chart below shows similar declines in the most common types of mortgage loans. The largest drop was in 15-year adjustable rate mortgages (ARMs), which fell by five basis points to 2.51%. 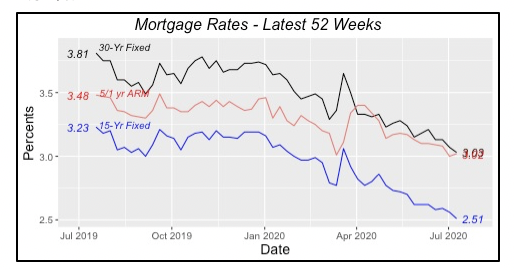