The interior design industry is following a similar employment pattern to most others since the start of the pandemic: sharp losses followed by incremental gains. In October 2019, just over 50,000 people were classified as interior designers. By May of this year, that number had fallen to 42,700, driven mostly by the economic shutdown. In July, the latest reporting period, 3,000 jobs had been added, bringing the total to 45,700 — a good monthly gain, but still 7.5% below levels at the start of the year. 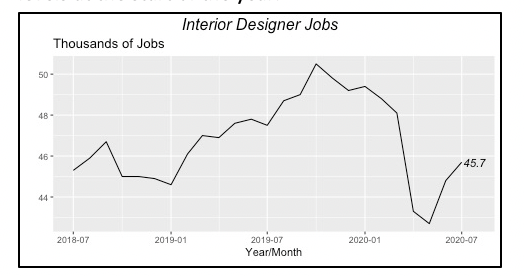 Although job recovery in interior design is slower than that of construction, it still exceeds many other sectors, as illustrated in the chart below. 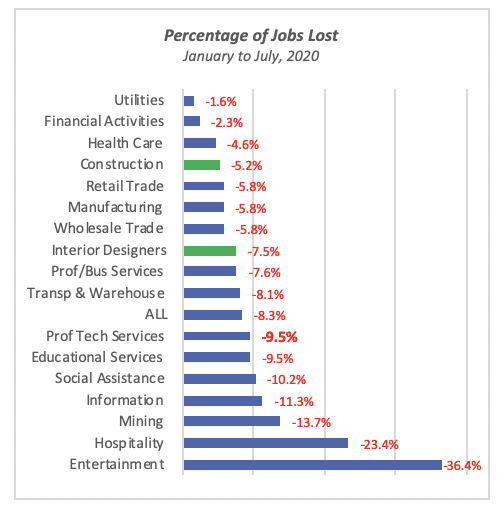 Breaking down the interior design industry by gender, currently 66.7% of all industry jobs are held by women. This is considerably below the traditional mix. In fact, just three years ago, women in interior design were nine percentage points higher than the current level.

Employers added 1.37 million jobs in August, the lowest number of monthly job increases since the huge loss of 21 million workers back in April, when the nation’s economic shutdown was first imposed by the government.

The number of jobs gained in August would have been even fewer, were it not for the federal government hiring a quarter of a million workers to help with the 2020 Census.  The majority of these Census jobs, however, are part-time and temporary. 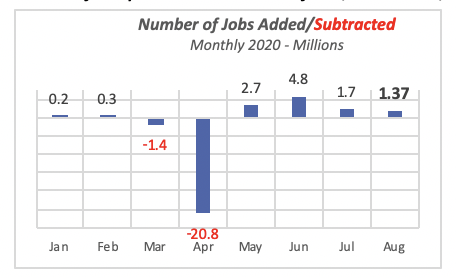 But despite the relatively modest gain in August, the official unemployment rate fell nearly two percentage points to 8.4%. As has been reported, all the gains that had been achieved since the end of 2016, which brought the unemployment rate to a historical low of 3.5% by the end of last year, dissipated quickly when the economic shutdown was imposed. The rate rose to a high of 14.7% in April.

The unemployment rate fell — that is, the job situation improved — across all age and ethnic groups, as well as in all the professions tracked by government statistics.

Women’s unemployment improved more than men’s, with the rate for women falling by two percentage points, while the rate for men was down by 1.5 points. The gap between men and women is currently just three-tenths of a percentage point, even though it had widened to nearly three points during the worst of the shutdown in April.

Anecdotal evidence suggests that employers are having difficulty getting back workers, given the extra benefits that laid-off workers were getting through the so-called CARES act. Private companies have compensated by giving more hours to some workers. This is highlighted in the chart below, which shows weekly hours rising to 34.6 in August, up from just 34.1 in March. 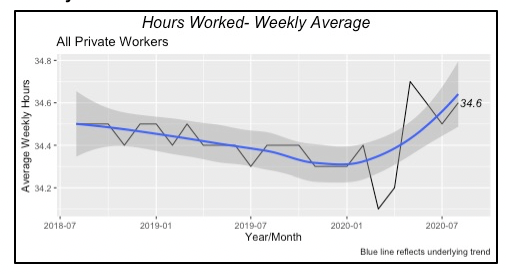 Several industries have greater demand for workers, reflected in the largest increases in the number of hours worked. Since April, Manufacturing has ramped up with an overall increase of two hours per week, for a work week of 40 hours. Leisure & Hospitality’s week has increased by 1.6 hours to a weekly average of 25.8 hours; it should be noted that this industry relies on a large number of part-time workers.