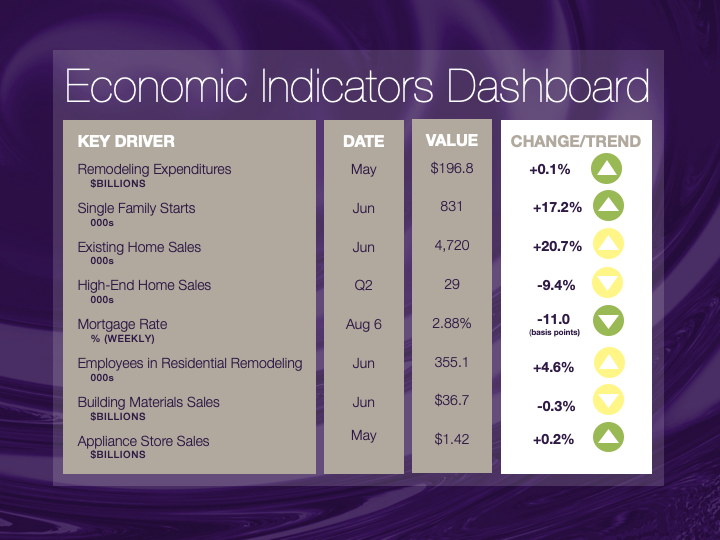 The economic recovery from the COVID-19 crisis will be long and spotty, but one area that has shown strength is homeownership. Perhaps it’s an effort to escape densely populated urban centers or apartment complexes, or perhaps it’s to take advantage of historically low interest rates. Whatever the motivation, compared to the same quarter a year ago, an additional 7.5 million households joined the ranks of those who have achieved that piece of the American dream: homeownership.

This gain brings the total number of households who currently own their home to 86 million, the highest in history. That is an increase of 9.6%, also the largest leap, historically. Furthermore, as can be seen in the chart below, there are more than 10 million homeowner households today than there were just four years ago in 2016. 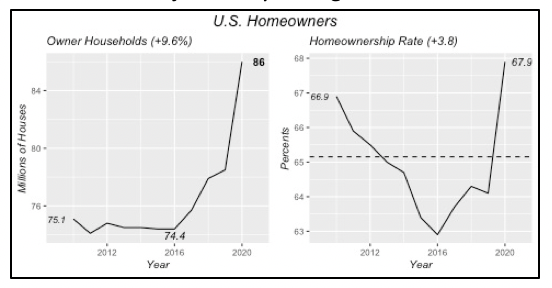 This year’s increase is the result of a combination of renters who opted to become homeowners, and individuals or couples who decided to form a new household. Among the latter may be the people who has been living in their parents’ homes who are finally able to afford a home of their own. Among the 7.5 million new homeowners, former renters represented 42%, or 3.2 million. The other 58%, or 4.3 million, represent entirely new households, so-called “new household formations.”

The chart below shows that the second-quarter rate is just 1.3 percentage points lower than the all-time peak reached in 2004, at the cusp of the last housing boom. That run-up in homeownership rate, increasing from around 64% in 1994, took a decade to increase 5.2 percentage points, while currently, it has taken only one year to gain 3.8 points.

Moreover, and more importantly, the current gain in homeownership has not been achieved through dubious, sub-prime lending to financially fragile consumers, as it was in the early part of this century — a practice that we now painfully know led to millions of foreclosures. Today, banks are more strict and careful in their lending; the Fed’s latest survey of bank officers reveals that “banks tightened standards across all categories of residential real estate” during the second quarter (For more on that, click here.) 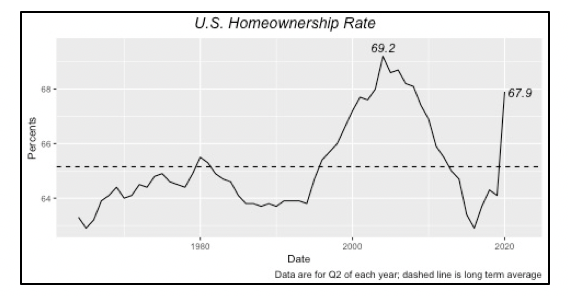 The importance of homeownership to NKBA members cannot be underestimated. Homeowners typically reside in homes that are larger, on average, than those of renters. More importantly, homeowners spend more on remodeling, maintenance and general improvement of their homes than owners of rental properties, and they do so with greater frequency — all of which  signifies a great opportunity for designers and remodelers.

Homeownership and the Housing “Shortage”

For quite some time now, the low inventory of homes for sale has thwarted consumers from purchasing a home. But, at the same time, the latest data on homeownership suggests that there are plenty of houses available, since these new homeowners were able to purchase a home. This leads to the questions: Is there a conflict? Or is some of the data incorrect?

No, there is no conflict in the two sets of data.

The vast majority of houses came primarily from two sources; houses that were vacant, or rental properties that were turned into owner-occupied homes. A third source of houses is newly built homes, either single-family houses or units in new multifamily buildings sold as condominiums. Another source is office buildings or other commercial buildings that may be converted into lofts or livable houses, but there is almost no data to substantiate this. 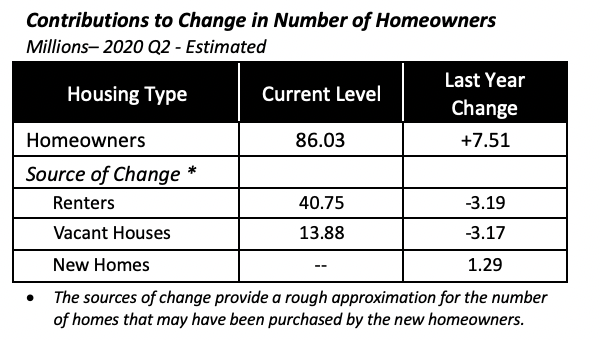 The second-quarter gains in homeownership were broad-based. Homeownership rose across all four regions, as well as for all age groups and races or ethnic backgrounds tracked by the data.

On a regional basis, the biggest gain was in the South, where the homeownership rate jumped by 5.1 percentage points, bringing it to virtually the same as in the Midwest. The latter region, as seen in the chart below, has historically been higher than the South by approximately 2.5 percentage points on average — but this year, the difference between the two regions has become nearly negligible. 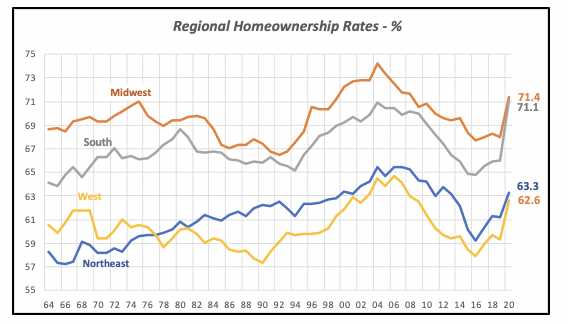 Younger Households Get a Bigger Foothold

Within age groups, the biggest gains were attained by younger households, even those under 35 years of age. The largest gain, however, went to households headed by people between 35 and 44 years old, whose homeownership rate rose by nearly 5 percentage points over the last year.

But the homeownership rate rose among all age groups, as illustrated in the chart below. Since  the rate increases with age, older households naturally have a greater ownership rate. They have had a longer working life, and therefore more time to accumulate wealth.

Despite last year’s gains, the current rate of ownership among all age groups is still lower than what it was at the peak of the last housing boom. 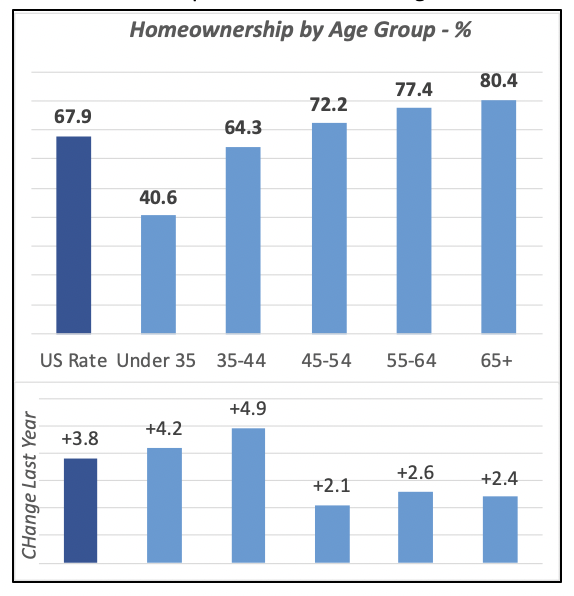 Two ethnic groups that are tracked by this data, Asians and Hispanics, also saw large improvements in homeownership. That of Hispanics rose by nearly 5 percentage points but, more notably, their current rate is the highest historically. During the early 2000s housing boom, it was as high as 50.1%, a shade lower than today’s rate. 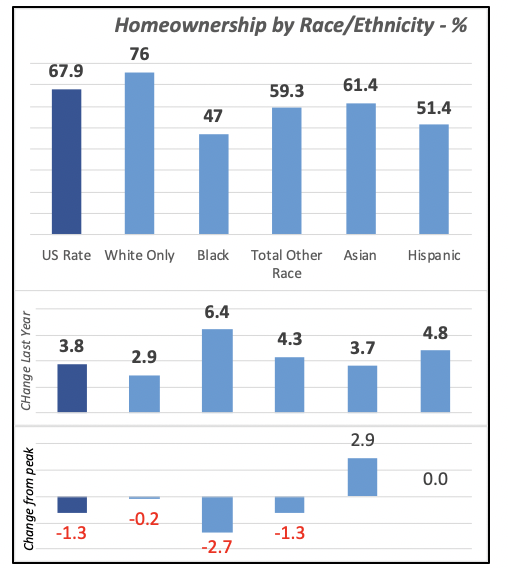 So, amidst all the current gloom caused by the pandemic and shutdown, housing appears to be the bright spot in the economy. NKBA membership, positioned at the center of this segment, is more fortunate than other industries.

The avowed policy of the Federal Reserve Bank to continue pumping money into the economy is succeeding, and interest rates keep falling.

The 30-year, fixed mortgage rate hit last week another historical low, falling to an average of 2.88% on loan commitments. 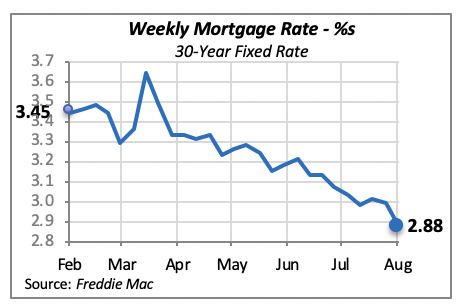 Such low and falling rates should continue to support the housing markets, for new construction, home purchases as well as remodeling. But the Fed does not appear to have any concern for the long-term consequences of its policies.

Historically, there are a number of examples of economies where similar policies led to serious inflation. The most extreme cases were Venezuela, most recently, and also Zimbabwe earlier this century. This is not to suggest that this will happen in the U.S., but the government’s profligacy is a matter of concern.

The dashboard displays the latest value of each economic indicator with a colored triangle that highlights visually the recent trend for each of the drivers. “Green” is a positive signal indicating that the latest value is improving; “Yellow,” as it’s common understood denotes caution because the variable maybe changing direction; and “Red” indicates that the variable in question is declining, both in its current value and in relation to the recent past.

Note that all the data, except for “mortgage rate” and “appliance store sales” are seasonally adjusted and are represented at annual rates.

Remodeling Expenditures. This is the amount of money spent on home improvement projects during the month in question. It covers all work done for privately-owned homes (excludes rentals, etc.). The data are in billions of dollars and are issued monthly by the U.S. Department of Commerce.

Single Family Starts.  It is the number of single family houses for which construction was started in the given month. The data are in thousands of houses and are issued monthly by the U.S. Department of Commerce.

Existing Home Sales. These data are issued monthly by the National Association of Realtors, and capture the number of existing homes that were sold in the previous month.

High-End Home Sales. This series are sales of new homes priced at $500,000 and over. The data are released quarterly by the U.S. Department of Commerce, and are not seasonally adjusted. Thus a valid comparison is made to the same quarter of prior year.

Building Materials Sales. These data, released monthly by the Department of Commerce, capture the total sales of building materials, regardless of whether consumers or contractors purchased them. However, we should caution that the data also includes sales to projects other than residential houses.

Appliance Store Sales. This driver captures the monthly sales of stores that sell mostly household appliances; the data are stated at an annual rate. We should not confuse this driver with total appliance sales, since they are sold by other types of stores such as Home Centers, for instance.

We hope that you find this dashboard useful as a general guide to the state of our industry. Please contact us if you would like to see further details.

About the Author: NKBA Staff