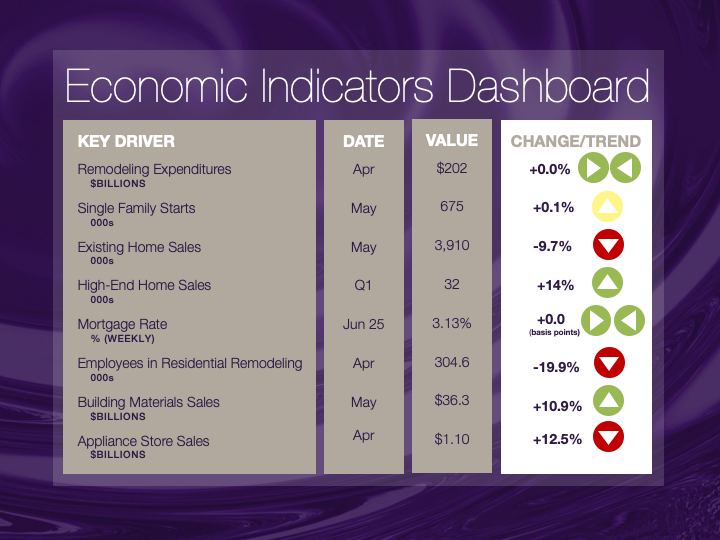 Total home sales, combining new and existing homes, fell more than 6% last month to an annual rate of 4.59 million units. Not surprisingly, considering the current state of affairs, this is the third consecutive monthly decline in home sales.

May’s sales drop was less dramatic than the 16.5% decline recorded in April. May’s sales pace is also at an annual rate of 1.4 million fewer houses sold compared to the 6 million sold in 2019.

But, the devil is in the details. A deeper dive reveals the decline in May was driven by a 9.7% drop in sales of existing homes, which fell to 3.91 million units, while new homes sales actually rose to 676,000 units, a sharp increase of 16.6%. New homes have shown more resiliency than existing homes, partly because the inventory of existing homes is very low. This, obviously, hampers sales — if inventory is low, there’s not much to sell —  while builders of new homes can respond more quickly to changes in demand.

But the increase in new-home sales was not sufficient to compensate for the drop in sales of existing homes, since the existing homes segment dominates, accounting for six of every seven homes sold. 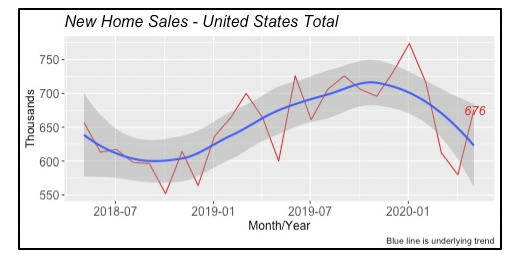 These two charts —above for sales of new homes and below for existing homes — display the relatively different paths they have followed over the last two years. Sales of new homes had fallen to an annual rate of 580,000 units in April, the lowest volume so far during the pandemic (assuming that sales in the next few months do not collapse); but despite the drop, April sales were still higher than the levels seen at the end of 2018. 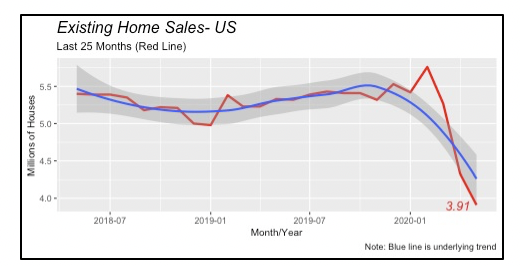 In contrast, sales of existing homes are dramatically lower than the activity maintained throughout 2018 and 2019.

The table below displays data for new and existing home sales, both nationally and regionally. 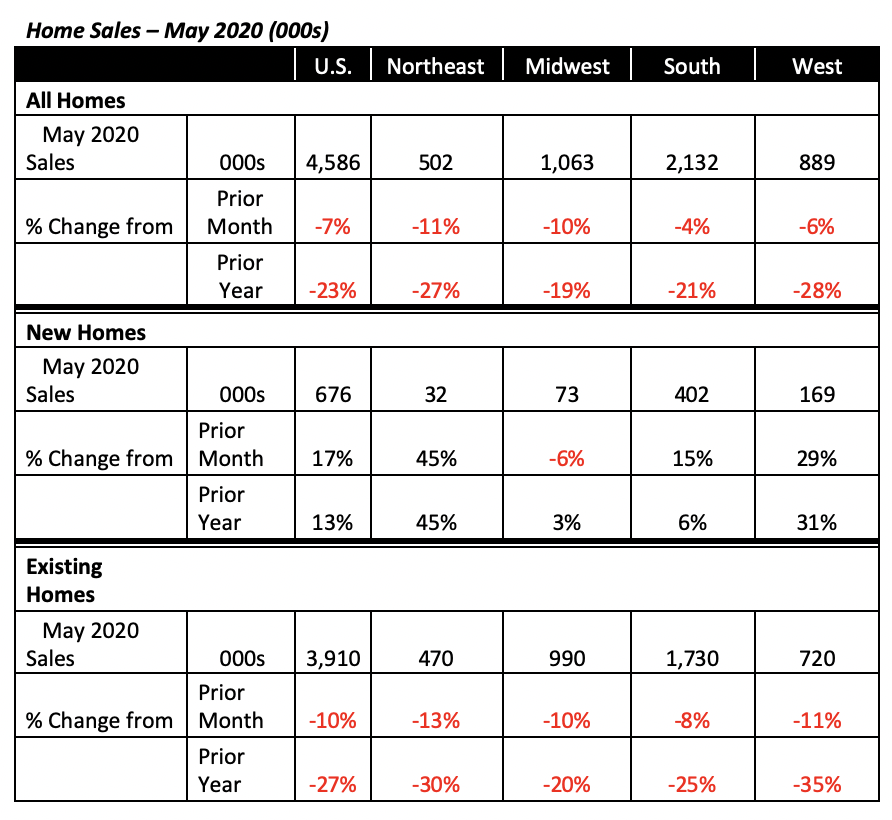 Manufacturers Regain Some of the Ground Lost

In May, U.S. manufacturers recovered some of the sales lost in the preceding two months. Both new orders and shipments jumped by nearly the same percentages in May. New orders rose 22.2% to reach to reach $205 billion for the month, and shipments increased by slightly more: 22.9%, for $234 billion worth of goods shipped in the month. 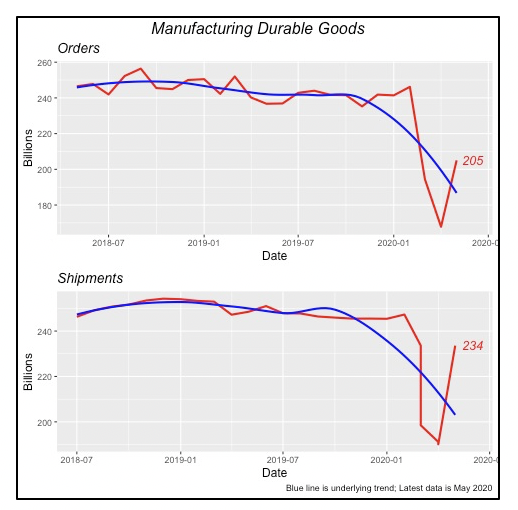 Despite similar relative gains, new orders lag last year by more than 13%, while shipments are a relatively milder 6% below the same month last year. Although new orders have improved, this improvement might not be sufficient to restore manufacturing production to the levels seen throughout last year.

At the same time, manufacturers have shed over 1 million jobs over the last 12 months. Whether and how fast those workers will be called back is uncertain, since it’s reasonable to expect that manufacturers will be cautious in boosting their employment rolls until they are certain the pandemic crisis is over and sales return to a permanently higher level.

Despite moves by most states to open their economies, starting at the end of May and continuing through most of June, the nation’s employers continue to shed workers. During the week of June 20, another 1.48 million people filed for unemployment benefits — just 60,000 fewer workers than the number filing the previous week. But the new claimants bring the total who have filed since mid-March, when the pandemic shut-down was initiated, to 47.3 million.

This figure represents more than 30% of the 152 million people who were employed in February. 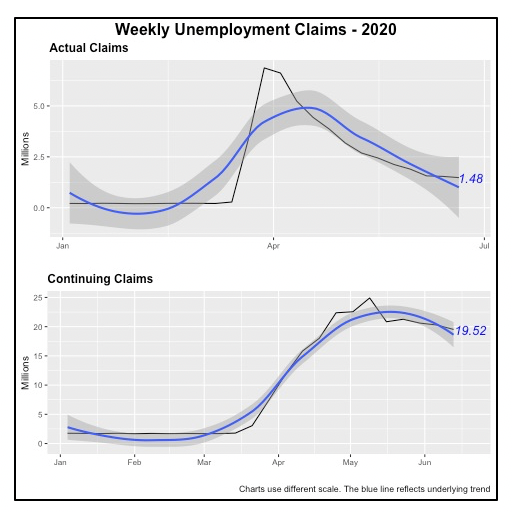 But the number of people who are actually receiving unemployment benefits dropped slightly, to 19.5 million. This means that there are approximately 18 million people who have no source of income currently, and who may not be counted as unemployed.

Many of them have given up hope of finding a job, and are thus not looking for a job —  they have left the labor force altogether.

Mortgage rates remained favorable last week, with the headline 30-year, fixed mortgage rate unchanged at 3.13%. The other two most common rates, the 15-year fixed and 1- or 5-year ARMs, also were virtually unchanged from the prior week.

But according to the Mortgage Bankers Association’s weekly survey, applications for mortgages fell during the week of June 19, even though applications are still running significantly higher than they were a year ago. 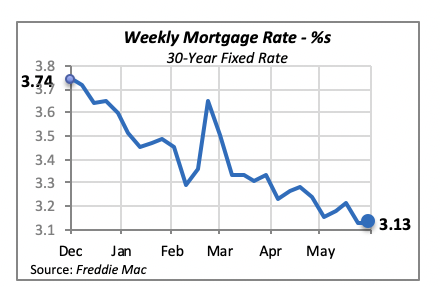 Low mortgage rates have helped cushion the negative impact of the pandemic shutdown on the economy, and the housing market in particular. Fannie Mae’s survey of consumer sentiment  showed a modest improvement in May, following a precipitous drop in the prior two months. The survey reveals that 32% of Americans believe it’s a good time to sell a home, while 52% believe it’s a good time to buy a home. 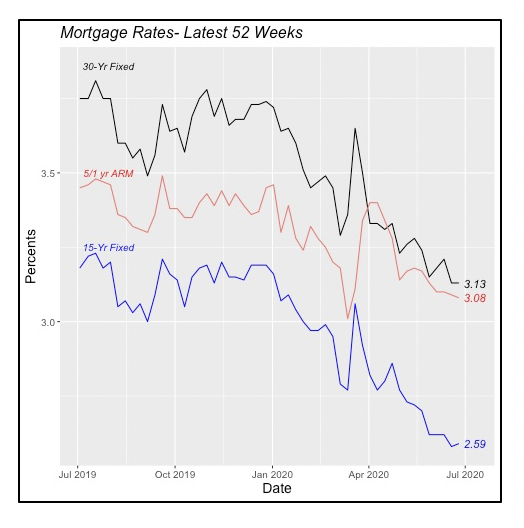 About the Author: NKBA Staff